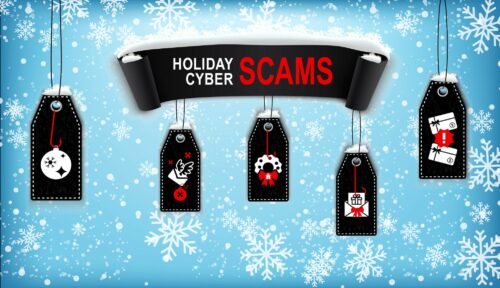 Anyone who goes online could be hacked. During Christmas time, this possibility doubles as we make a number of purchases and get so excited that we forget about security.

The rise of mobile commerce attracts hackers as well as users. It is really easy to pay with your smartphone, and certainly easy to hack it and steal your banking credentials. The situation is complex due to the lack of security expertise that is typical among the majority of smartphone users. We know how quickly and easily we can buy apps and other things with our devices, but we are almost illiterate in terms of mobile security. However, in practice, even crime experts can assume the role of a hacker’s victim.

Practicing safe cybersecurity can at least reduce the risk of an attack. For this reason, we’ve written this review of the most popular holiday phishing campaigns and prepared some tips on how to stay protected.

Deceitful greeting cards. We all like those colorful Christmas cards that are cute, funny and even animated. It’s Christmas in itself, isn’t it? Well, it certainly is until there is Trojan software behind that picture. You could receive a message that looks as though it were sent by a legitimate vendor (i.e., Hallmark). It’ll ask you to download an attachment that, at first site, appears safe and reliable. In reality, it is a Trojan that infects your PC and waits until you try to use your banking credentials online. Then it’ll show you a popup window suggesting that you verify/update your billing info. If you do it, your bank account can quickly become very empty.

Infectious online discounts. In fact, almost every letter that looks like a legitimate ‘too good to be true’ promotion, offered by popular air carriers, tour operators and online shops, could be fraudulent and contain malicious software in an attachment. Even a USB flash stick that you may have received as a gift at a local shopping center can contain a similar surprise.

The price of compassion. Got an e-mail asking to send money to lonely old men and women in a nursing home or children living in an orphanage? Some of them may be scam letters sent by frauds. You would be very lucky if these cybercrimes did not drain your entire bank account after you sent them money.

An expensive virtual Santa’s hat. Gamers are the usual victims of phishing campaigns. Hackers steal banking credentials, game items and high-level characters in order to earn quick money. They can do it in many ways. For example, they can send you Trojan software disguised as a screensaver of a powerful item.

All of these methods succeed only when a user gets excited and subsequently forgets about security rules. So keep calm and be attentive!